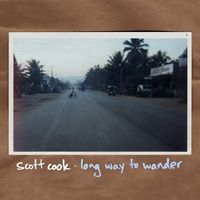 From the recording Long Way to Wander (2007)

back when I was younger, and even goofier
me and some friends of mine went off to the woods to have ourselves a camping trip
and in addition to the tents and sleeping bags and tarps and lawnchairs and firewood,
a potentially-dangerous cookstove and Frisbees and hacky-sacks and Trix cereal and beer,
we took along a little one-inch-by-two-inch rectangle of paper
and found we didn’t need so much beer

that night we laughed ourselves breathless
and got scared, and staggered in the woods, eyes all lit up
and when we had no other choice but to lie down
we saw our bodies join with the Earth, and saw the trees dance

in the morning these people came by and gave us the bum’s rush
left us to wander down the road, and through the woods
and contemplate the tiny mosses and lichens and mushrooms and flowers and dewdrops
and the tall bearded trees, and wonder just how it all came to be
and just how it was that somebody could own land

one of these days I’ll go rollin back
to all the things I forgot to write down
for now I’ll keep on wandering along
itching in my shoes, don’t know where I’m bound

and this walking rhythm reminds me of my buddy Raoul
he’s forty-something, from Venice
he’s got a handlebar moustache even wider than his smile
he’d walked across who knows how many countries,
and the locals everywhere thought he was hilarious
no shoes, only a small bag and a guitar across his back

well, fortunately I had a guitar too
this little cardboard three-quarter-size with a Nike swoosh on it
that I picked up in Chiang Mai for fifteen bucks
ended up giving it away to a kid in Bangkok who wanted to learn
but in the meantime it sure came in handy on that boat ride

and offhand I asked him, “hey man, you own a boat?”
he says “I’m a Venetian, I have five boats!”
and later on in that Indian restaurant in Luang Phabang he was on fire,
making toast after toast, yelling out for “more Beer Lao! More chapattis!”
and the shine in his eye made me wonder
whether he’d spent the night with that Israeli girl
or whether he’d somehow temporarily unlocked that great unspeakable mystery
or whether he was just drunk, or all three

and the last time I saw him I was rushing to catch a bus
the two of us crammed painfully into one of those little
cage-like, sidecar-like contraptions that rides alongside a motorbike
and I was aching to be leaving so soon,
with so much left to see and do,
and I turned around to the road behind me
and took the picture on the cover of this record
and I hugged my brother goodbye and ran for the bus
forgetting that this was Laos, and after all a schedule is just paper,
and in any case you can’t be going anywhere without the tunes!
so I had a half-hour to cool my heels while the boys got the tape deck half-working
and wowing and fluttering we disco’d off into that great, vine-tangled thatch-hut night

and every now and then I get to thinking about him
and wonder where he is, and what he’s doing
him and all the other folks we’ve split paths from back along the way
Tom Uduoj, where are ya?
and how about Craig Smart?
and that Danish punk Christian Plaschke?
and Heather Kehe and Isaac Marquez?
one of these days, I’m gonna roll on down to Eugene,
and ask around, and find you

one of these days I’ll go rollin back
to all the things I left lying around
for now I’ll keep on wandering along
long way to go, don’t know where I’m bound